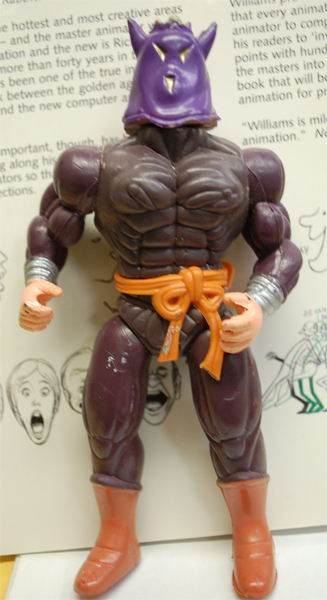 He's in scale with Masters of the Universe, but stands straight instead of doing the MOTU squat. His chest and arms look like this Wrestling Champions MOTU knock-off but his, umm, panties, are similar in design to Sungold MOTU knock-offs. He's solid hard rubber and poorly cast. He looks like he may have been inspired by Cobra Commander, but wears a dainty orange belt. He sort of gives off a large scale M.U.S.C.L.E. vibe with his weird design.

His hands are painted skin color, so I assume the purple is a unitard of some sort. Or body paint. And in addition to that plain purple hood, he has horns AND a crown!

This guy is all over the place, and not in a good way. But I have to admit I do love these knock-off Masters of the Universe figures, specifically because they are so oddball!

I did some asking around the internet and discovered he is from a line called Ninja Commandos. I found this picture of carded examples (PHW is there on the top right) at the Action Figure Archive in a thread that discusses this and some other similar Knock-off lines: 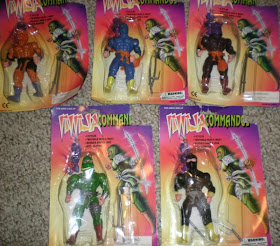 It looks like the head for this figure was also used on a line called Super Ninjas, larger figures with more articulation (elbows!) Then there were smaller versions called Dragon Ninjas, which is what mine and the whole Ninja Commandos line is a bootleg of (or later cheaper crappier release of.)

The Super Ninja/Dragon Ninja version of this guy was called Emperor Nightmare. This guy seems more generic and unnamed, but he's knock-off of a knock-off so what do you expect? He lacks any identification on the Ninja Commandos packaging, but Emperor Nightmare is as good a name as any, better than Purple Hooded Warrior anyways, so I think I'll stick with it. 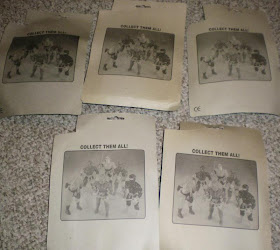 I assume based on the card art that these were probably from the early to mid nineties or so and were either dollar store fodder. But he's cheap and weird and oddball but somehow irresistible in his charm.